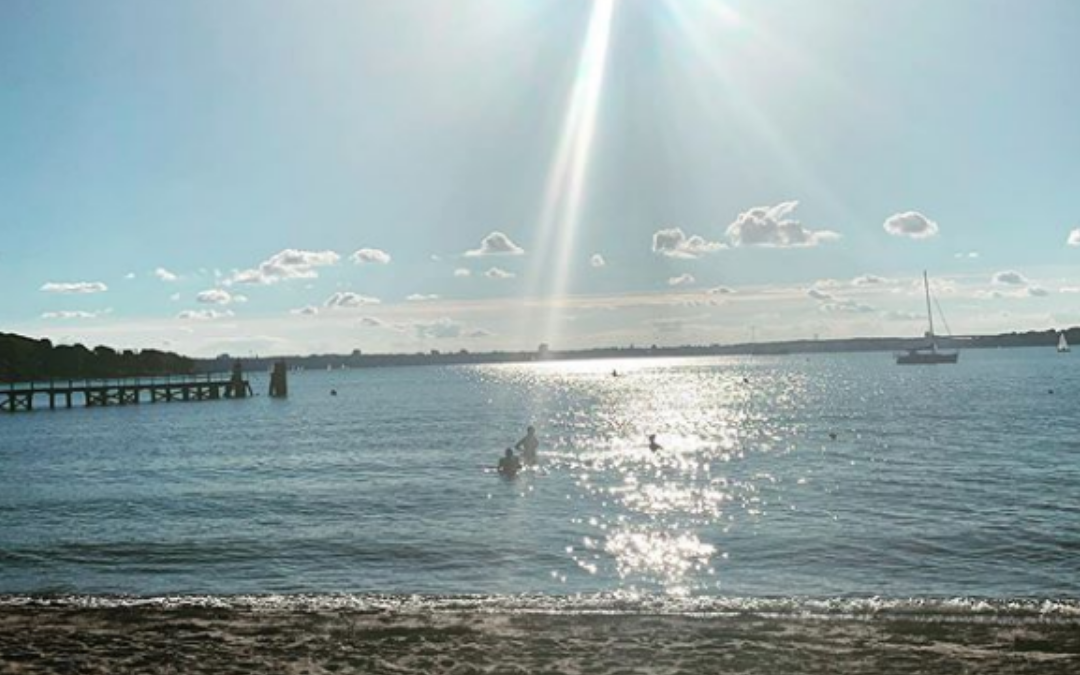 Sailing overnight to get to the Kiel Canal in Germany from Samsø island in Denmark proved to be the right choice to make! The weather was warm & sunny and the seas calm, making sailing through the night wonderful! Even Liv had a few hours watch at sunset & before sun-up! But that wasn’t the nerve-wrecking part of the sail.

About 8hrs after we set sail from Samsø island where the navigating was tedious because of shallow waters, we arrived The Great Belt Bridge – an elegant 18km-long suspension bridge which connects East & West Denmark. The clearing distance is at about 65 meters at it’s highest, which makes choosing a spot to pass under not so difficult – or so we thought – being that our mast reaches “only” 17 meters high…Just as we were approaching the bridge, with no one in sight, we thought we had a good path planned out – there were some hinderances to navigate here, as well! Suddenly, we hear our yacht’s name being called out on the VHF radio. “Oh! That’s us!” Eivind reacted quickly to answer the call. On the other side of the line was the commander of a 400meter long freighter ship going about 17knots! He was wondering what our course was for the clearance under the bridge, so Eivind agreed to pass under a slightly lower part of the bridge as to stay clear of the freighter. After the call, we spotted the ship – it looked like a huge square block! We were amazed at its size & a bit frantic to cross in front of him to get out of the way! And, then, as all sailors might admit, we hoped we read the map charts correctly on the height of the bridge & slowly crossed under – it always looks like you’re going to hit it! After we made it under & were far away from the shipping lane, we had some lunch & made the decision to do an all-nighter to get to Kiel since the conditions were so favorable. It was beautiful, it was calm, it was summer!

The night sail proved to have a surprise of it’s own. As we drew closer to Kiel, it was important to be vigilant in watching for other ships in our path. The waters were crowded with cargo ships that were heading in & out of the world’s busiest man-made waterway transit – the Kiel Canal. So, it wasn’t hard to meet one every now & then. Two of the main routes north of Germany are Kiel-Oslo, Norway and Kiel-Goteborg, Sweden.

One of our more too-close-for-comfort episodes was on Eivind’s night-watch when we sailed only about 300 meters away from the “Cool Express” cargo ship that sped along at about 20knots, making larger-than-we-expected waves that collided with oncoming waves creating frequent steep waves of about 2 meters that then came crashing into the side of our sailboat! The sound the waves made on our boat were so loud that it made Eivind quite uncomfortable, something that rarely happens. 😉 THAT sparked a new respect for these giant speed boats!

Once we got closer to the bay area of Holtenau-Kiel, we noticed that sailing was VERY popular. We were surprised to see at least 200 boats out sailing when we arrived. Harbors packed with sailboats lined the coastline, too! What a beautiful arrival scene it was!

We found an anchoring spot just outside of one of the boat harbors, not too far from the entrance lock to the Kiel Canal. For the boys, one of the major advantages of anchoring is that we HAVE to use our dingy! Aksel is the main chauffeur and loves to take a few extra trips with his younger brothers when the circumstances allow. But this time there was so much “traffic” of all kinds, that we didn’t allow him to. He still got to drive us over to the harbor to take a little walk & do some grocery shopping. This was also a great opportunity to get some ice cream in the sunny weather since we just arrived another country (our 2nd country!). The boys persuaded us into a “One-ice-cream-in-every-country!” deal…(later, I added to the deal a “One-picture-of-my-3-boys-in-every-country!” It was barely accepted, but they love their mommy, so…;))

On our second day, we motored over to the other side of the bay with our dingy to a place called Heikendorf. A quaint sea-sports town greeted us with a beautiful ocean-view trail along the coast. It became so warm that the boys stripped off their clothes & went swimming at a beach along the way. This side of the bay showed signs of Danish influence as well. This stop was a much-needed rest. But, now, we were ready to take on the Kiel Canal!