Blog 12 – Back on the North Sea: We ended up on Borkum Island, Germany 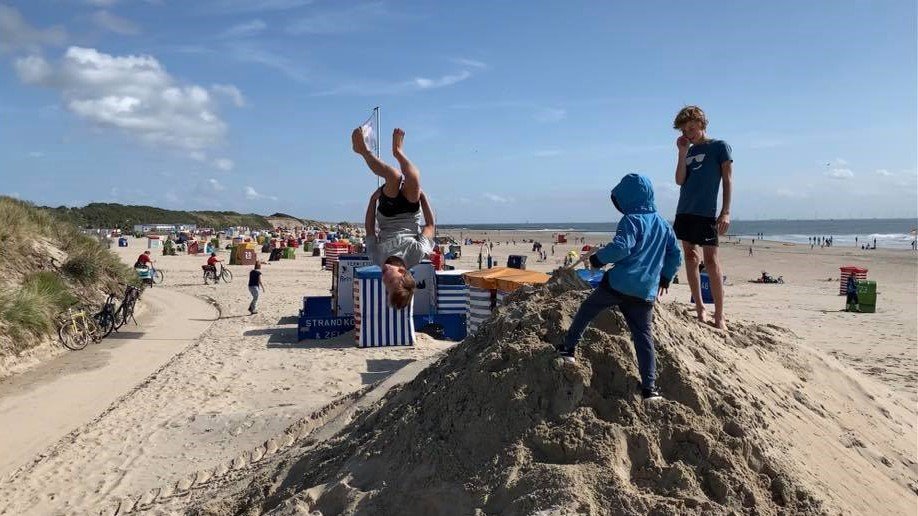 Another rough sail on the North Sea:

As we were waiting to exit the Kiel Canal throught the Brünsbuttel Lock, it rained cats & dogs on us. We left in the afternoon to get the timing right so we could arrive one of the islands bordering Germany in daylight. We had a few routes planned to see how far we could get on this passage. The North Sea was going to get the best of me again! Fortunately, Eivind keeps his dinner in!

Heading out to the North Sea sounds intimidating in itself. In addition, we were passing so many large cargo ships on the way out, needing to also be aware of both the currents, the very shallow waters on the outsides of the markers and the dark clouds in the distance.

The beginning of this trip went relatively well, though, despite our concerns. I even got out my knitting! We had to motor for most of the evening since the wind was straight against us and we had 3knots of current against us to begin with. But, as planned, the current turned and gave us 1.7knots pushing us along upping our speed to about 8.5knots (COG – course over ground)! So, that felt good! We were making headway on a long passage. The dark clouds seemed to roll away before we got to them also!

However, sailing against currents & wind makes for very unstable waves – and it got me sick really quickly, along with Nikolai & Aksel. Fortunately, we made it through the night & had a beautiful island to seek shelter at and explore! Borkum, Germany.

Well, the harbor itself wasn’t very pretty, but we later found out that the other side of the island is where all the charming boutiques, ice cream parlors, tourist shops, restaurants, trails & beaches were. We took a walk over to the other side and the boys were ecstatic to have so many sanddunes to flip from! They also couldn’t stop the urge to go swimming in their underwear in the big waves again, just like at Hals, Denmark and Vlieland, Netherlands! It’s so fun watching their excitement…almost like they’re at the wave pool or at an amusement park! The downtown area was quaint & we bought ourselves an ice cream there before riding the cute little trolley-train back to our (ugly) side of the island! Always fun to get out and explore! Glad we did. We really needed to have some fun after the last passage.