Blog 1 – Prepping for the long voyage! 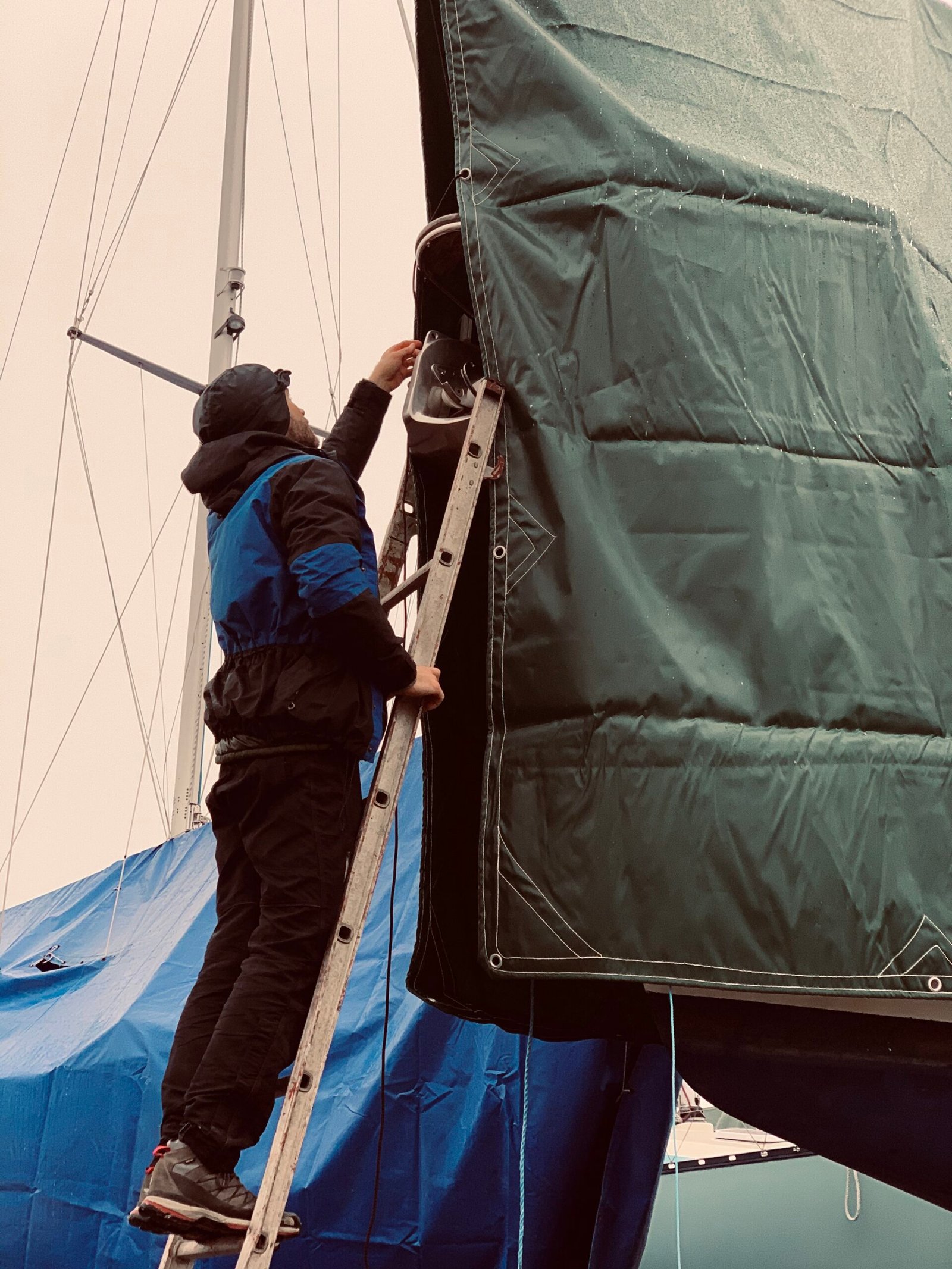 It was a Friday evening in August 2018 with the usual Friday taco and relaxing at home after a long work-week…but earlier that day a thought crossed Eivind’s mind that would change the course of the Amsrud family for the next few years…that is, if his wife, Liv, would go along with such an adventuresome & challenging commitment. Eivind could hardly wait for Liv to get done with her errands after putting the kids to bed to present his “idea” with her. When the words came out – “I have an opportunity to present to you – what do you think about sailing around the world in about 2 years?” – Liv’s response was an immediate – “YES”! You see, Liv was quietly waiting for a drastic change to happen in their lives – they had a nice, comfortable life – which they were very thankful for – but something was missing in their rutined 9-5 lives! Adventure, zeal, time to invest in the kids, time for each other, time to explore & decide ourselves what we get exposed to & influenced by. Time to focus on what we believe is really important.

So, from that day on, all our focus went into preparing for this journey! We didn’t even know how to sail yet!! 😉 Being suddenly a team with a new focus brought Eivind & Liv new excitement in their relationship! Off to a good start!

Next, the search was on for a sailboat and beginners’ course for sailing, investing in circumnavigation books, research on everything that goes along with such a “trip” – all in addition to the usual 9-5, PLUS, Liv had just got accepted into the Practical Teacher Training program at the local university over the course of the next 2 years! This was something she needed and it was the last year they offered this educational program before the credential requirements were that one needed a Master’s degree (which Liv did not have). So, time was short & very very busy, to say the least! But, together, and with enough will (& frugality), we knew we could pull it off!!

We took our Beginners’ Sailing Course together with SailOn in Melsomvik where we live in May of 2019. We finally found and bought our sailboat, S/Y ELANE, in June of 2019 – a Jeanneau Sun Odyssey 43. We sailed it back all by ourselves from Drøbak, a city not too far north from Tønsberg…a beautiful, calm sail – a beautiful first taste of our adventures to come. Over the course of 2 years, Eivind read thousands of pages & blogs about sailing around the world, about diesel engines, trade winds, routes, equipment recommended and such, as well as watching hours of how-to’s on sailing & preparing for a circumnavigation. We also took a course on boat rules & navigation – a type of skipper course – and Eivind took his VHF license.

When winter started to let up for spring in 2020, Eivind could finally do some repairs, installations and priming the hull of the boat for epoxy primer and finally copper coat (an anti-fouling that is supposed to last us 10 years!!).

As the end of the school- & work-year approached, we were realizing that we STILL had A LOT to do, practically, before we were prepared to throw the lines!

Thankfully, we found renters for our house relatively quickly after we put out the add, so we were free to leave from July 1st. However, moving out of a large house & into a small boat, in addition to work & schooling, is VERY time-consuming. Eivind didn’t officially have vacation until July 8th either! So, Eivind’s lovely parents came to the rescue (as always) to help us pack-up, repair things, clean out the house, and prepare the boat! We feel so blessed to have them as our parents!! We knew that we would’nt have met our goals so gracefully if they hadn’t been here!

Plan A was to move onto the boat by July 1st & sail off by Eivind’s birthday, July 14th, but that didn’t happen. Not just because of all the work & inventory we had to do, but because we had 2 major setbacks in addition. When we finally decided to test the main sail’s new sliders after getting the mast upgraded with a trysail track, the sliders got jammed! Even though this upgrade was finished the month before, we, unfortunately, didn’t test the sail until days before we were about to leave. Getting new (smaller/weaker) sliders put us back a week. And, then, Liv got a major tootheache…not common for one who has no cavities. It turned out she needed a root-canal, even though there was nothing visibly wrong with the tooth. However, we were thankful it happened before departure rather than during our adventures!

As everything with sailing is – unpredictable – so was the start of our journey! Summer had eluded us in July but was back full-on as we said our last goodbyes to friends & family who stopped by our boat now & then in Kjøpmannskjær, Norway. With tiredness & thankfulness to both Eivind’s parents & the possibility of such an adventure, we finally pushed ourselves to set sail on a sunny, hot Monday, August 17th, the first day of school for the boys! What an exciting trade-out! Bon Voyage! 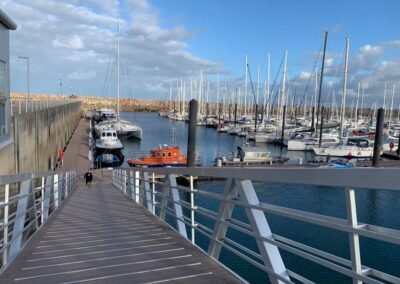 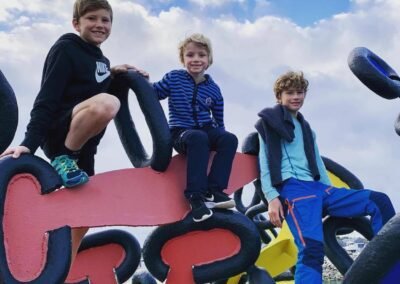 The boys on modern art by harbor 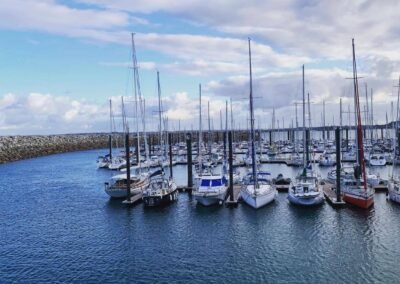 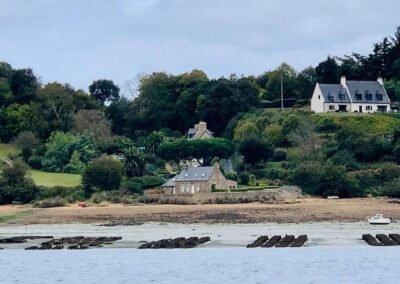 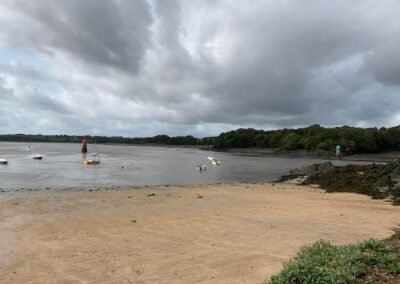 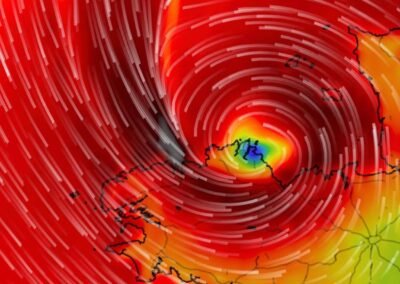 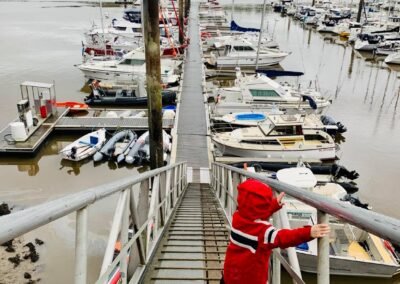