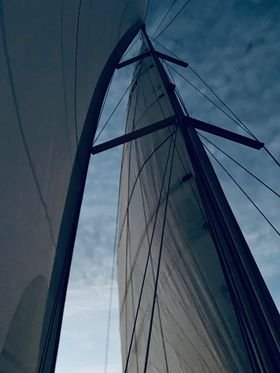 We started off into the sunset from Jomfruland Island in Norway to sail overnight to Skagen. Even though the winds blew lightly, we decided to put out the main sail in all it’s fullness and the genoa. This was actually the first time we used our sails this year!!! Yes, we didn’t have time to go sailing before departure, and then only hauling up of the sail was to try out the new sliders at the dock. This was a risky decision, to not use the sails until sailing out of the country, but it went well! Liv took the first night shift for about 4 hours and Eivind took the rest until the port of Skagen.

Sailing into Skagen was the first time we saw so many freighter ships & cruise ships anchored outside of port! We thought they might have been drift because of the consequences of Covid-19, but we can’t be sure…we found out that’s it’s pretty normal to see large ships anchored outside of port…even far outside. It was still a little intimidating sailing past such large ships for the first time.

We were hoping to be able to walk along the long sand beaches that are at the tip of Skagen, what it’s known for, but we found out that the port was too far away & it didn’t look like it was deep enough or sheltered enough for us to anchor – but we didn’t research much. We were planning on moving on the next day anyways. We experienced Skagen harbor a bit loud & party-atmosphere the evening we arrived – Swedes & Danish still on vacation, I guess. We took a quick stroll, bought the boys some (expensive) ice cream, and headed out the next day, hoping for a quiet port where we could find a beach. (My friend, Hannah, recommended Sæby port. So, that’s where we were headed next.)