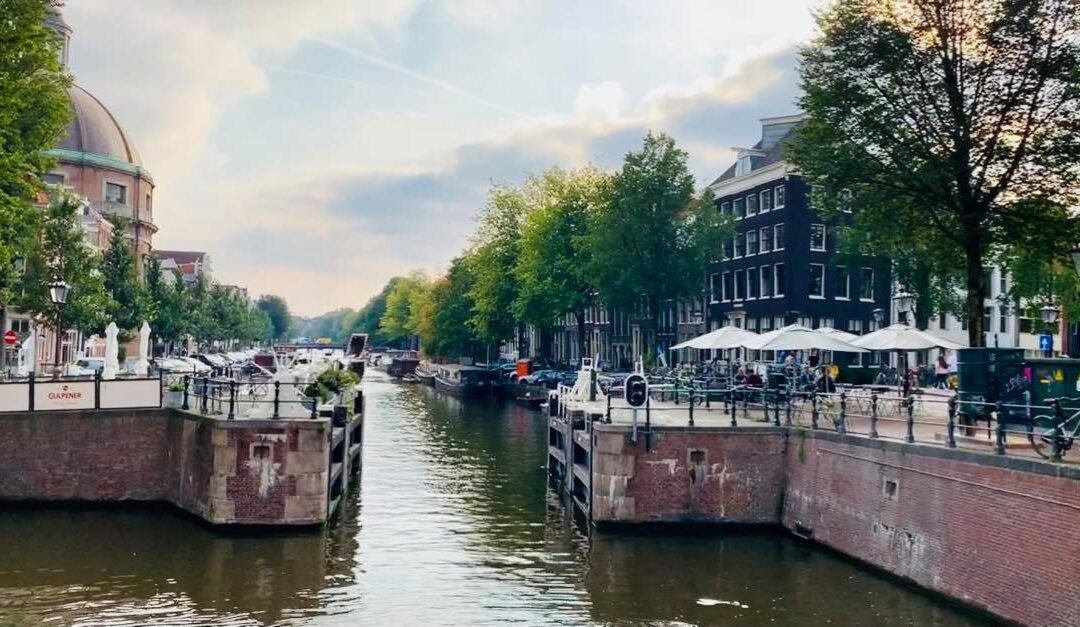 It was a short trip over to the Amsterdam canal & we were excited to see the city. There were a few things to be aware of on our way over though. The canal is a highway for cargo ships, so there were many to steer clear of. This we knew of beforehand. What we didn’t think of were all the passenger vessels crossing back & forth over the canal at a frequent rate. We had to dodge many & almost got hit by one!

We were amazed at the many amusing buildings along the canal and noticed a huge swing on the top of a skyscraper as we motored in.

A fellow sailor recommended we stay at the Amsterdam Marina in the middle of the city, and we were satisfied with this choice. It’s always nice to know exactly where to go in such a busy area!

We were planning to move on the next day, so we took a quick sight-seeing tour right away. We just needed to take the canal-taxi over to the other side to experience downtown Amsterdam. The taxi itself had a lane for bikes/mopeds and a lane for pedestrians.

We were overwhelmed by the amount of bikes everywhere when we got off the taxi boat! They were EVERYWHERE! And, there were even traffic lanes & traffic lights specifically for directing cyclists. We felt a little lost not knowing the traffic rules & it was hazardous just trying to cross a sidewalk – we not only had to look out for cars, but also bikes…and they rode fast, without helmets! In Norway, we are used to everyone wearing helmets. We usually love cycling, but we absolutely did NOT feel comfortable doing it here – someone was BOUND to crash! 😉

We had a lot of fun looking around in the narrow streets & over the canals, though. We noticed that the “coffee” shops offered things a little STRONGER than caffeine ;). The boys got a little cultured, you could say. There was everything from water-pipe cafés to mushroom shops to laughing gas at a souveneir shop to cannibas brownie shops!

A few hours of the many bikes & impressions was enough to wet our appetite and we were ready to move on down the canal the next day!