Blog 18 – Cherbourg, France: Held back by seaweed & tide just to be delayed by strong winds 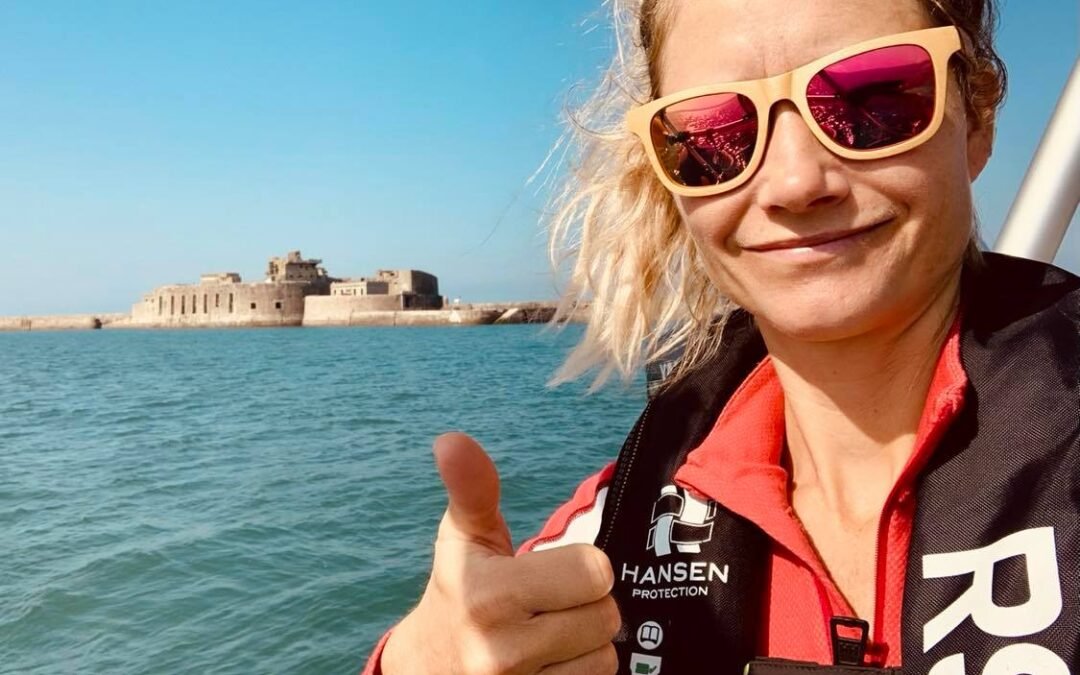 Clear skies – and yet ANOTHER firey orange sunset!

Cherbourg is situated at the northern end of the Cotentin Peninsula, on the English Channel coastline, in Normandy, northwestern France. It is the second largest artificial harbour in the world. Cherbourg port has a lot of history. Cherbourg had been a strategic stronghold for several centuries – its castle was first built in the 5th century to protect the whole width of the Cotentin. In 1944 it served as protection from the Germans in the Battle of Cherbourg.

Its central harbour wall can be sited 4 km from the coast harbour-walls, stretching for more than 6 km! As well as Cherbourg Naval Base, it has been used for mercantile shipping and harbours hundreds of pleasure crafts! (Wikepedia)

We experienced first-hand that the harbor is frequently used as a military training base. When we arrived the harbor, we noticed many anchoring symbols on the charts just near one of the major borgs. We thought it looked like a perfect place to anchor. However, immediately after we dropped anchor, we were called on the VHF to move.

Our sail through the English Channel started with sunshine and very light winds…so light that we put up our parasailer again! We were a little nervous, but the sailing was so smooth & comfortable with it up! We changed back to the genoa before sunset when the winds picked up and had a smooth overnight sail. However, we got a little caught in some seaweed along the way and found ourselves in 4-5knots of current against us JUST as we were approaching Cherbourg. To our detriment, we were stuck next to a navigation marker motoring at almost 0knots as we got pushed back for at least 3 HOURS…we just couldn’t make it past the marker….VERY FRUSTRATING – and tiring.

We ended up staying in Cherbourg for a little over a week because of strong and gusting winds. At one point, the wind gusts clocked at almost 100knots! We needed to stay put until the right conditions arrived. Fortunately, we met a very friendly French man from a neighbor sailboat who had some advice for our future travels, particularly the English Channel area and sailing around the Bay of Biscay. There is a lot to think about in this area when it comes to sailing: wind, currents, waves and tide tables all play a major role! We had a lot to learn!

Since we had so much time in Cherbourg, we got a lot of common things done: homework, errands, laundry, updating. We also explored the area and made it up to the top of one of the old borgs that overlooked the city.

We also went on a poop-hunt being that we noticed that the French were not that good at picking up their canine’s droppings – at least not in Cherbourg. We resisted walking in the grass because it was too hard to see where the poop was. Ha! We were really surprised that it was that bad. They even had stands with doggy-bags around town. Who knows!

Waiting in one harbor so long (when it’s not your intended destination) affects one mentally as well as physically. You get a little complacent, maybe irritable, impatient and it almost feels like you’ve forgotten how to sail. Well, your body has, at least. It’s always exciting to finally be able to move on towards your intended destination. Time to go!